UHD/4K is the future

Is UHD/4K the future? Of course it is. And that means it is not the present.

UHD has been around for at least five years. The main stream computer monitor market has changed a lot during this time. For example, 21:9 ultrawide has become “a thing”. It is very popular in the gaming community. Nowadays if a gamer upgrades his/her monitor, the hard choice is usually between ultrawide and 2.5K/G-Sync/144Hz. It even has its own master race. I bought one specifically for gaming, and it has served me well.

On the other hand, low-end 1080p monitors are now “legacy” products. Two years ago I bought an Acer 1080p 60Hz monitor, with sRGB coverage and good overall performance. It was $100. Now you can get similar products with ~$60. It seems to me that the low-end market has been “low” enough, that some of the high-end (read: UHD) products should have creeped into the main stream by now. So I looked online, and realized: not quite.

Usually a UHD monitor is at least $500. Of course it may not be a large sum if you consider the fact that high-end 1080p monitors can go above $1000, but those $500 UHDs don’t even have the shiny features — no true 10-bit color, no wide-gamut coverage, and usually not even a USB-C port. And I will remind you that with $600 you can buy a decently capable PC. Also I found some interesting quirks in these products (and UHD monitors in general):

The low-end of the high-end

At this point, I couldn’t resist but upgrade my 1080p Acer, so I started looking for cheap UHD monitors. My criteria are

I found only three candidates.

Dell people are usualy the boring ones in suits, so I bought the LG 27MU58. The monitor was said to be factory-caliberated, and it came with a caliberation report, which I trashed immediately. I bought a USB-C to DisplayPort 1.2 cable with it, and used it to connect my MBP and the monitor. Very quickly I found something wrong — the color was off (against D65 white), and there was no good color presets; it was either too warm, or too cold. The closest preset it had was at 6900K, measured by my A7R2 camera, which I could probably tolerate if the monitor was otherwise perfect; but it was not. The screen was slightly bent, with the center went towards me (so no, I didn’t get a curved screen for free). And the screen would randomly go black shortly after waking up, and recover immediately. There were reviews saying a bad cable could cause the black screen, so I couldn’t decide if it was the monitor or the cable (I later found out it was the monitor). There was also something very strange with the dark grey on it. If I make a gradient from mid grey to black, I could see “bumps” in the gradient (more on that later).

I returned it, and decided to never buy from LG.

Of course, the only choice left is the Dell, so I bought the P2715Q. It was also factory-caliberated, with a report. The report looked like this: 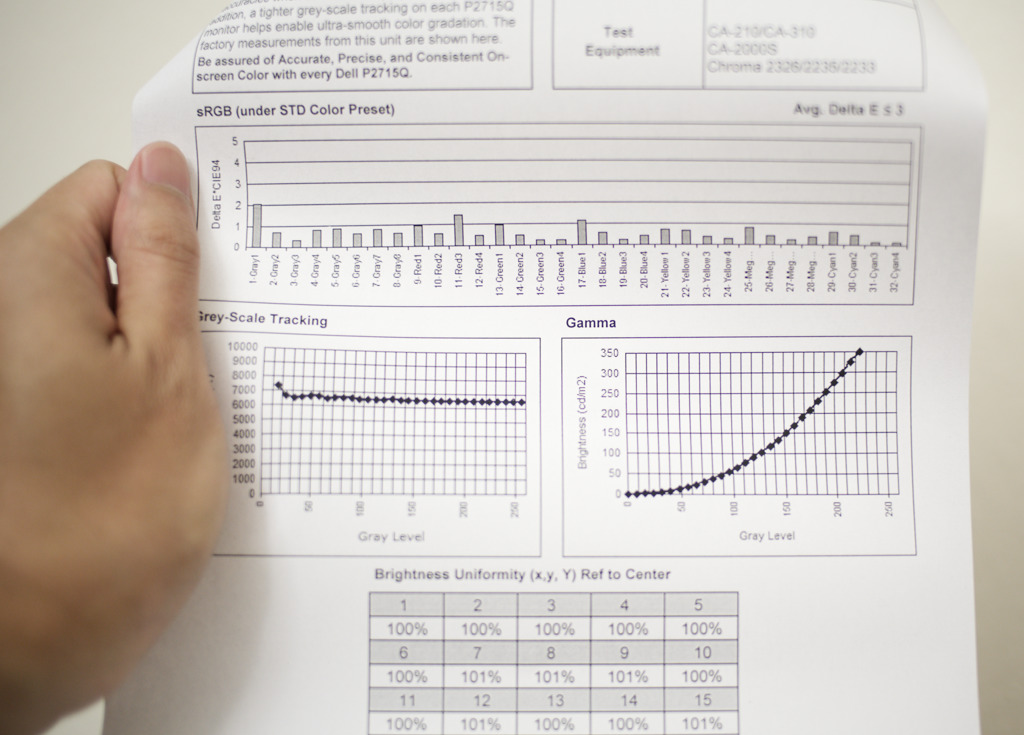 According to the report, the white point was exactly at D65, but I still saw it to be a bit warm, but it was already better than the LG. My camera measured the white to be at 6000K. It was also a bit different from the screen on the MBP. 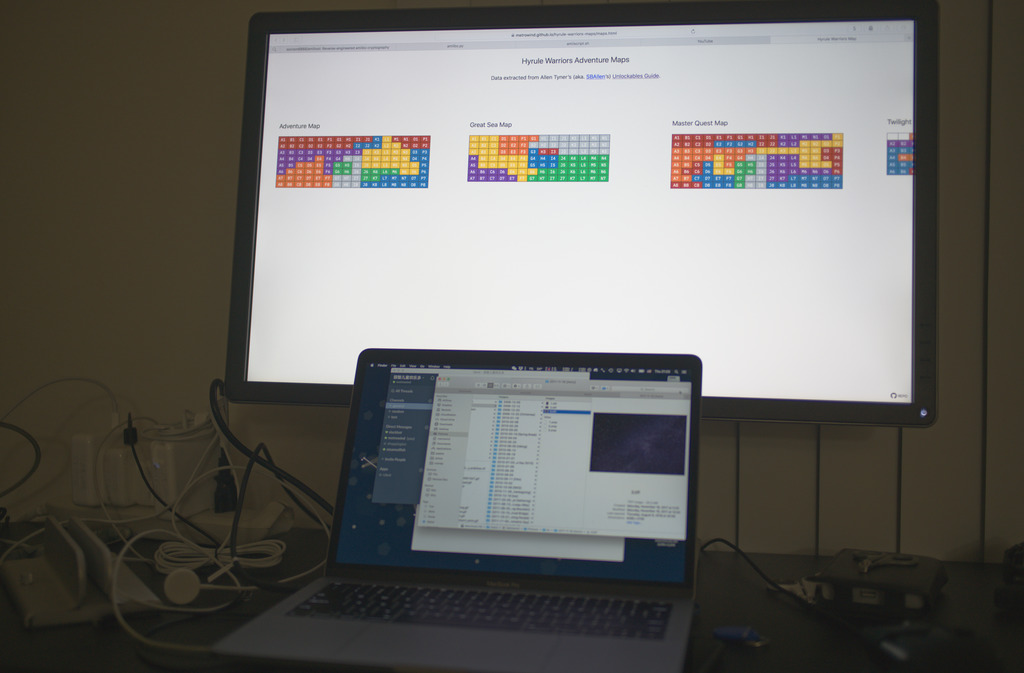 The monitor had 10-bit color, and macOS respected that.

Figure 2. A section from System Report.

The really annoying problem was in the dark-grey presentation on this monitor. Like the LG (they could be using the same panel actually), a gradient from mid-grey to black had severl “bumps”. Consider the following pattern, and remember you can open these images in a new tab to see them in full-size:

Figure 3. The gradient test pattern from mid-grey to black. This is generated in Affinity Photo in a 16-bit file, and down-sampled to 8-bit PNG.

This was what it was like on my monitor:

Figure 4. The test pattern above displayed on my monitor. Taken with my camera.

It is hard to see what was wrong, especially against a light background. So I pushed the photo to make it more prominent.

Figure 5. The photo above, pushed. The arrows mark places of “bumps”.

As you can see (hopefully), this was not a smooth transition. I have no idea what could have caused this issue. My cheap Acer monitor did not have this problem.

Another way to see this problem is to use a 8-bit test pattern, and look at individual colors. Here is the pattern I used:

You should see banding in this pattern (again, try open it in a new tab). And if you use a tool, for example the Digital Color Meter in macOS, to extract the colors, you should see individual colors in these bands, with the RGB values differing by 1 between adjacent bands. All bands should have the same width. But this was not what I saw on the monitor. What I saw was this:

Figure 7. The test pattern shown on the monitor. This is zoomed in to the right half, and pushed.

Here I mark the edge of the bands with red lines. Obviously they are not evenly-spaced (the left half is fine).

Initiaully I thought this is a seperate issue from the “bump” problem, but at the time I wrote this, I realized that they could share the same underlying cause.

I then did more tests on this monitor. I also had a 2015 MBP from work, which still had Thunderbolt 2.0 ports. The monitor came with a mini-DisplayPort to DisplayPort cable. I used that to connect the 2015 MBP to the monitor. Interestingly, in this setup the banding looked much better. There were still some mild sudden jumps, but the bands had the same width. A closer look in System Report revealed that on that MBP the output was 8-bit. Perhaps it was the 10-bit dithering that caused the problem. Another interesting find was that if I connect the 2015 MBP with a HDMI cable, the gradient is much worse, and it was also different from the 2016 MBP result. There were still unknown variables in this situation. For example, did macOS render the UI in 10-bit? In principle this had nothing to do with the problem, but color issues were never simple.

The date is 2019-01-08. I gave the P2715Q to my wife, and I need a new one. Very unfortunately, it was discontinued (I think at the end of 2018). Given that the P2415Q is still there, and is the only 24 inch UHD monitor in the lineup, I suspect it was to make way for Dell’s new 27 inch models, namely the U2718Q. From what I gathered, the new model has some QC problems, and is not as good as the P2715Q performance-wise (apparently the P2715Q is considered to be very accurate in terms of colors), and it is more expensive. Therefore for me, Dell is out.

My only hope right now is the Monoprice 27 inch UDH monitor. But it is out of stock until the next month.

Also, some time ago I read that the uneven banding problem is due to the (lack of) precision of the DAC in the monitor.